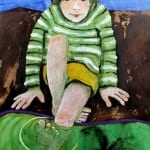 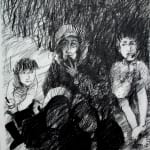 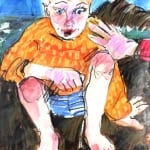 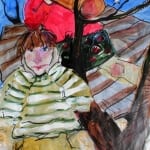 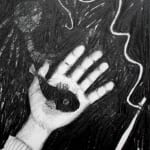 One of nine stories written for his children using their names but with people from his own childhood in 1950s Cornwall.

Jamie was reluctant, to say the least.

Jamie climbed up the tree and joined Kate in the tree camp.

‘Hardly a tree camp,’ thought Jamie, ‘it’s an old pallet she’s found on the beach and shoved in the tree.’

Kate was at the drain pipe ‘AT LAST JAMIE IS HERE!’

The sound of Kate’s voice boomed through the drain pipe and reverberated right round the village, across the beach and up the valley.

‘I bet Harry Pool heard that up in the Old Mill,’ thought Jamie.

Jamie could see quite a lot from up in the tree camp, he had quite a view of everything, but couldn’t see one person who looked remotely as if they were expecting him. In fact he couldn’t see anyone at all.

Henry had locked himself in his room when he heard Kate saying she was going down to the tree camp. He’d taken the precaution of picking up Whisky, his cat, and carrying him into his room with him, because he thought this was going to be a long time to be alone in your room without a cat. Henry was doing everything with Whisky in his room that his mother forbade him to do, rubbing noses, burying his face in Whisky’s fur and smelling him, and putting him down the bed.

Kate was winding the gramophone, furiously.

‘THE NEXT RECORD IS I’LL BE HOME BY PAT BOON!’ boomed Jamie, in concert with the drainpipe.

‘THIS IS I’LL BE HOME BY PAT BOONE!’ said Jamie through the drainpipe.

Henry heard that in his bedroom, through the window. He also heard the beginning of the record, which was louder than the drainpipe.

Inside Henry’s bed Whisky must have heard the squeal and found his way out from under the sheets. Seeing that the window was open, the cat saw his chance to escape and before Henry had a chance to snatch him back, leapt through the window, onto the coal shed roof, and off, across the garden and down the drive towards the tree.

Henry unlocked his door and dashed down the stairs three at a time.

‘Of course you can sing,’ said Kate ‘you’ve got a lovely voice, you sang like a lark at Christmas, what’s that carol you sang in church?’

At that moment Mrs Cobly arrived at the bottom of the drive. She was on her way back from Jack Brenton’s and had a rabbit in her hand. She stopped to listen to Jamie’s singing.

‘That’s lovely,’ she said to Kate ‘lovely voice that boy’s got. He sang that in church at Christmas time.’

Mrs Cobly stood fast in the middle of the road and listened to Jamie singing his carol. She wouldn’t budge when Jimmy Babs motored down the hill in his Ford Popular, so Jimmy Babs had to stop his car and listen to Jamie’s singing as well.

Jack Brenton always skinned Mrs Cobly’s rabbits and she always held them by the back legs so they dangled down by the hem of her raincoat, which she wore in all weathers, even hot sunny days like this one. Mrs Cobly’s head was slightly cocked, her face turned up towards the tree camp where Jamie’s pure high voice boomed Silent Night through the drainpipe.

Mrs Cobly’s skinned rabbit lent itself particularly to the interest of Henry’s cat Whisky, who had made his way down to the bottom of the drive.

Jamie’s singing seemed to have more appeal to the public than Pat Boone’s, because here was Mr Strongman, making his way up the lane from the shop, his white apron stained with pig’s blood, his hands full of cabbages, three in each hand.

The last person to arrive on the scene was Henry. He was running, as usual, after Whisky. He was caught up short by six cabbages.

Looking round, the first thing he saw was Jimmy Babs, leaning out of his car, looking up to the sky.

Then he heard Jamie’s rendering of the final verse of Silent Night.

Then he heard the crack, a scream from Kate, and the clunk of the gramophone hitting the ground.

Mr Strongman dropped his cabbages and managed to catch Kate in his arms as she came tumbling after.

Henry, swamped in cabbages, looked up to see Jamie hanging in mid air, kicking his feet where the tree camp once was, and clutching onto the drain pipe.

Jimmy Babs by now was out of his car and shinning up the tree.

Needless to say Jamie had ceased singing Silent Night, but Mrs Cobly was still gazing up into the tree, muttering to herself.

‘I always said he could climb like a monkey.’

She was referring to Jimmy Babs of course, who by now had Jamie by the waist and was lowering him slowly to the ground.

Henry didn’t want to leave, but he had to.

He had to run up the drive as quick as he could.

He didn’t want to but he had to.

He didn’t dare risk being present when Mrs Cobly discovered that his cat was eating her rabbit.

Jamie and the Blenny Pool     by Nick and Jane Darke

The crab inside Jamie’s pocket wouldn’t keep still. Jamie kept having to take his thumb out of his mouth in order to stuff it back in and that made his thumb taste salty, which he didn’t like but he had to have his thumb in his mouth in order to concentrate on the very difficult task in hand. In a quiet moment, whilst the crab was having a rest from trying to escape, Jamie peered cautiously over the edge of the pool to see how things were getting on. Nothing much was happening. Beside him the limpet which he’d cut up for bait was starting to smell. He didn’t mind that, but it meant it would soon go hard and he’d have to prize another one off the rock and squash it out of its shell, and that meant more activity, which the blennies in the pool would notice. The king blenny was a very shy fish indeed. It was also the biggest. Huge. In fact, when Jamie caught a glimpse of it now and again, he would admit to himself a slight twinge of fear, and though it was his life’s ambition to catch this prize fish, he wasn’t at all sure exactly how he would handle it when it was at last securely impaled on the hook. It was his secret hope that Henry would be with him when he caught it. He could do anything when Henry was there, because his younger brother was more scared of these things than he was, and that made him capable of anything.

Suddenly the line went taught and urgent tugs dragged the slack underneath the crevice where the king lived. Jamie eased the line towards him, and then let it back into the water. The fish on the other end had gone right back, perhaps under a stone, and this made it difficult for Jamie to catch. With a great deal of skill and patience he managed to prize the fish free from the fortress. It had given quite a tug, but he knew it wasn’t the king, a general perhaps, if he was lucky. He gently pulled the fish out of the water, making sure his shadow didn’t fall across the pool. No, it wasn’t the general, a sergeant maybe. He took it to another pool and let it swim away. He watched it find a place to hide under a tuft of dark seaweed. He wondered it felt to be caught on a hook, held by his hand and plopped into a pool it didn’t know? Maybe the fish had been there when the tide was high and all the pools were under water. What was it like to be a little fish in the big sea when the tide came in?

Jamie’s plan was to catch all the blennies in the other pool and rid the king of his army, so at the end of the day the king would be the only one left to come and get the food. The king was crafty, which was how he’d grown so big and become king.

Jamie kept very still and watched the little fish moving from ledge to ledge. The pool was like a garden of pink and green seaweed with smooth hard pink stuff between. Tiny prawns moved in jumps whenever a blenny got close. He wondered what the blennies were doing, why they moved all the time. Were they a family? He’d thought they were an army. Was that a mother and those two brothers? Was the biggest the oldest blenny or could it be another kind of blenny that grew bigger?

He lay on his stomach with his head close to the edge of the pool to watch the little creatures.

The crab found a way out of his pocket and crawled away. Jamie watched it as it found a shallow pool to hide until the tide returned.