The Art of Catching Lobsters

Buy The Art of Catching Lobsters DVD directly from Jane Darke at  janesdarke@gmail.com or  find it on AMAZON.

After Nick’s death from cancer Jane made another documentary film about their life together and her grief, THE ART OF CATCHING LOBSTERS. First broadcast in 2007 on BBC4.

The Art Of Catching Lobsters – Blurb

The Art of Catching Lobsters is an extraordinary and poignant film, written and directed by Jane Darke.

Shot entirely on the beautiful, rugged North Cornish coast, the film chronicles the life of Jane’s husband Nick as Playwright, fisherman, and beachcomber. After suffering a stroke Nick is unexpectedly diagnosed with cancer. The film captures his efforts to pass on his knowledge and experience to his sons by teaching them the art of catching lobsters.

The Art of Catching Lobsters is a moving portrayal of loss, grief and hope. Nick was a man with a great sense of fun, who planned his life by the tides. This intimate journey details how he copes with rehabilitation after a stroke and the shock of cancer diagnosis.

Film-maker Jane Darke uniquely captures pain, suffering and death in an honest account of how a Nick works through his last weeks and she copes after his death. And how, through their son Henry, she witnesses the gift Nick has given them both.

Jane said of her intention: “I wanted to make a film about the playwright Nick Darke because he was a man from a different time, a passionate, talented, generous, wise, beautiful man and because I loved him. The Art of Catching Lobsters is about love and loss, it’s a celebration of life.”

The Boatshed / Sevenstones Media Co-Production was written and directed by Jane Darke and co-produced by Sevenstones Media. A BBC commission, the film was developed with the help of Cornwall Film and University College Falmouth.

Jane Darke’s previous feature The Wrecking Season, also shown on BBC 4, is a unique story about coastal communities along the North Atlantic coastline. It was produced by her production company Boatshed Films. She combines film making with work as a writer and painter, recording her life on the Cornish Coast.

The Art of Catching Lobsters was broadcast on September 27th 2008 on BBC 4 and traveled the festival circuit thereafter.

Shot over nearly two years the film’s early production was helped by investment from Business Relations at University College Falmouth. 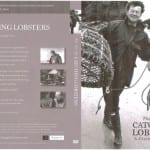 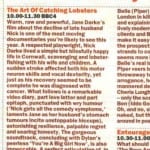 On the face of it there’s nothing to compare lobster fishing with play writing, but delve down and the similarities are there. One plunders humanity’s detritus, the other baits with putrid meat. Both, when successful, are ludicrously over-paid and their practitioners wonder where the next one’s coming from.

Seizure of moment is the key skill that a lobster fisherman shares with the playwright. Play writing involves accumulating diverse gobbets then judging the perfect time to feed them into the computer. Start to write too early with too few gobbets and you dry up, frustrated. If you leave it too late the material grows stale and the process becomes laboured. Its the same with lobsters. You shoot your pot you leave it lie. The prey smells the bait, expresses interest, wanders over and takes a look with those stalky eyes. It crawls around the pot and probes for the bait but can’t quite reach, so it swims in through the neck, dines and enters the parlour. Trapped. If you haul your pot too early you’ve lost your fish but if you leave it too late and the sea gets up, the pot shifts and in two days its gone.

The playwright who is also a lobster fisherman works to a lobster fisherman’s time frame. Life is governed by the moon. Writing becomes tidal, low water the deadline. There are no people about. No dogs. He closes his eyes and dreams. The playwright becomes not lobster fisherman, but lobster – the lobster occupies a hole in the rock and emerges at night. It is a solitary, cautious beast with few predators. Fiercely combative when threatened, it has survived millions of years without a brain.