Nick and I found an orange tag with a warning stamped onto it about taking/stealing the pot it was attached. We found a few in fact but one had the words Audrey May and a phone number on it.

We bought a special device for recording phone calls and Nick phoned the number up. At the end of the line was Kevin Mellow on the East Coast of North America, the other side of the Atlantic Ocean.

He and Nick really hit it off. He was a lobster fisherman and like Nick’s fisherman friends in Padstow he was down to earth and hard bitten. The fishing wasn’t too good out there. He’d worked in a factory. He later worked on tugs on the Hudson. He’s back fishing again now, Nick’s sister went to see him and happened to turn up on his 50th birthday.

You can hear him talking to Nick in The Wrecking Season. 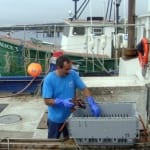 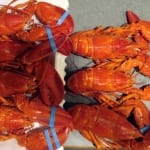 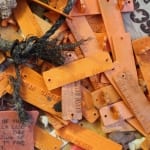 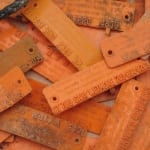 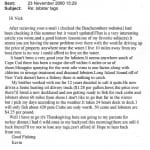 I was surprised to get a call about a trap tag floating so far.I have been

lobster fishing since 1984.I still have traps with those older tags even

fiberglass with a detroit diesel engine.Most of those tags are attached to

the traps with stainless steel hog rings,some were put on wood traps(which i

don’t use anymore) with copper nails,and a few were put on styrofoam bouys.I

from the bottom,it might help me to estimate when it was lost.We also put the

I have been a fisherman since 1984.Most of the time i have lobster

fished,currently with 15 or30 trap trawls with bouys on each end.I have also

for surf clams and quahogs,gillnetted for cod and tautog.The government has

quahogs.I hope to here back from you,best wishes and good fishing in the new

Sorry i sent a reply put forgot to tell you where i was from.Westport,

Massachusetts.It is about 50 miles south of Boston.Most of my fishing is done

south of Marthas Vineyard island in between 1fathom and 45 fathoms of water.

Unfortunately it’s not that organized over here.In Massachusetts your

number which everyone is given at birth.It is possible that several persons

could have the same last four digits.The orange tags are not required by law

as the long thin ones are.You must have your number in the trap,but you can

burn or cut it in.The orange tags are the quickest way to put your number in

at seventeen cents apiece.These tags must all float your way because i can’t

up.With the way that the price of lobsters is going over here there might be

more money in finding tags and selling them back to their owners.

The first year that Massachusetts issued tags was 1999.The long thin

shortly.I attached a scan of the zones for the northeast United States and

Westport,Mass.,where the circle is below it is the general area where i

fish(also where the flat tag you found would have come from.)The first four

#’s on the tag are my license # issued by the state,the federal # is

different and not on the tag.The fifth # is the zone you can fish in(2) then

MA is the  state,00 is the year.Lobster is the fishery.The tags are only used

in a few fisheries right now.(scup,seabass,lobster).

any other zone.If you only fish in 3 you can fish 2000 pots.If you fish in

any other zone besides 3 you must go by the more restrictive measures.I fish

them all it takes 40 hours,with about 6 hours rest in the middle.

purchase,at 17cents each.You must put new ones on every year and most

fisherman leave the old ones right on the trap.I am sending the scan of the

chart with the microft word (rtf)let me know if you get it,it was on page 2

Hi Nick
I enjoyed talking with you and Simon on Friday.I sent 4 pictures, if you don’t
get them all let me know and i will send them one at a time.For the offshore
lobster traps we use the orange aluminum poles with the red ball attached on
each end.For the inshore 15 trap trawls we use the smaller plastic poles with
a small bouy on one side and the double bouy on the other side.The pole with
the bouy on top is a quahog bullrake that i use from my small boat.You can
see the tags as they are put in the traps now.I use stainless rings to hold
them in so i doubt any more will be floating your way,although i can toss a
few over the side if you like!
Best of luck with your health
Kevin

Hi Nick
Just listened to the tape.Was great!Heard it twice then gave it to my
parents”they are proud of me”also saw one of your books on internet and
bought it,thank you very much,i live near the ocean and will think about
wrecking on some days,sounds interesting,best of luck,stay in touch!
Kevin

Yes another boat that was out of Westport,He sold it to another Westport fisherman,we must have a direct path with all the junk that floats out of here to Cornwall,talked to the warden today in Westport he was a crewman on the LaureL back in the 1980″s he got a kick out of heaing one of the tags floated to England.Catch you later.
Kevin

Hi Nick
I can’t read all the tags but 2 more of those are from Westport,the Laure L and the Broadbill,our old telephone area code was 617,changed to 508,I know the persons that owned both boats although the Laure L no longer fishes.Well i have to go,it’s 3:30 going fishing.Catch up with you later.
Kevin

Hi Nick
Sorry to hear you have suffered a stroke.Hope you are feeling better.I have looked on the Beaccombers website from time to time.Wondered how you were and why i hadn’t heard from you.Yes i could go on BBC,shouldn’t be a problem,just remind me a little ahead of time,just turned 40 and i forget things now!Fishing has been way off this year,prices dropped $1 since Sept.11 attack.I was out fishing that day and watching tv(i have a 5″ TV on boat,along with a computer that tracks boat and shows where all my traps are)and couldn’t believe what i saw.Americans all appreciate we have Great Britain as our #1 friends through thick and thin,just wanted to tell you that it is always on the news how much your country stands by us.Can’t wait to hear from you,take care of yourself.
Kevin