There are two main types found on the strandline. The long necked Goose barnacle (Lepas anatifera) once thought to part of the life cycle of the Barnacle Goose, because they have similar markings and colour, and the buoy barnacle (Dosima fascicullaris). The first attaches itself to a floating object the second makes its own float. The first has a hard segmented shell, the second has a softer segmented plate. You can find them both together on a strandline.

They both feed by shooting out and drawing back a fan which traps small floating particles.

Lepas anatifera often has a stowaway. The long necks and shell can grow to several inches long and become a thick medusa like tangle on the object they cover. In amongst the necks lives a specialised creature named the Columbus crab (planes minutus). It takes on the colours of whatever it floats on, on the barnacles its grey, white and rust, but no two have the same pattern. It floats in the Caribbean amongst Sargasso weed and will tuck itself into the folds of a loggerhead turtles underbelly. 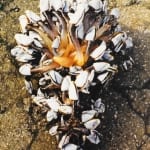 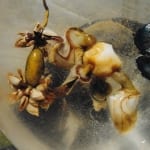 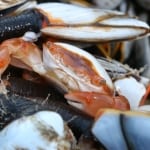 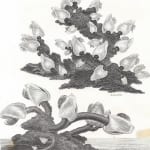 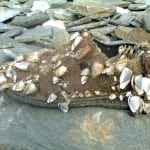 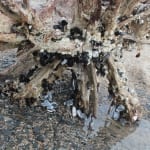 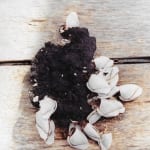 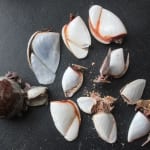 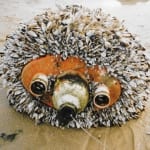