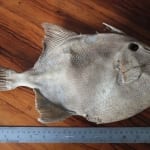 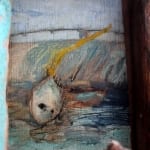 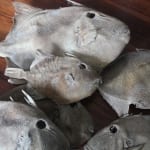 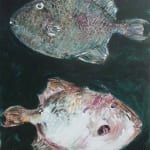 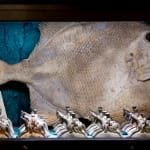 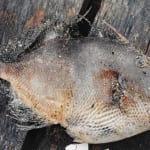 The Triggerfish we find in Cornwall are a tropical and sub-tropical species now found in the waters all along the west and south coasts of the British Isles. They were an early indicator of Global and particularly Ocean warming due to the Green House Effect caused by the increased levels of CO2 on the upper atmosphere around our planet.

There are forty different species of the family BALISTIDEA scattered around the oceans of the world. The ‘British’ triggerfish is Balastidea Capriscus.

I found my first Triggerfish on a Cornish Beach in 1991. It’s still the largest I’ve found at 41 cms and was then the largest recorded in Cornish waters and also then a rarity. It was lying dead on the strandline with holes on both sides of its head where its eyes once were. I guessed that a seagull had pecked out the eye on one side then flipped it over and taken the other one. I hoped it was dead before this happened. I have only once found one with the eyes in and that was still alive but only just. We put it back in the water but it was probably eyeless by the end of the day. It was January, the first frosts had chilled down the shallow water around the coast and there was a freezing mist lying low on the waves. Bad weather for Triggerfish. They don’t seem to like storms either.

I wonder what the tipping point is. What is the temperature that is just too cold for them to stay alive? Do they swim into a cold patch and then suddenly it’s too late and they seize up? What goes first, the brain, the ability to swim? It must happen too fast for the Triggerfish to turn and swim to a warmer depth. And in a storm do they get swept along, not stream lined or sinuous enough to twist out of a breaking wave? They are clever fish who can learn from their mistakes and victories. They are also thought to be aggressive by divers who have been attacked by them, another sign of their intelligence, triggerfish intelligence. Large Triggerfish bite. They recognise a diver as the potential threat they might well be. Round here most divers have a spear gun.

I wonder if there are Triggerfish in these waters that have learned to turn round and swim for deeper water when the sea reaches an uncomfortable temperature. Maybe that is their problem, in their natural habitat they swim in the shallow sheltered seas of coral reefs, here there is no shelter in the shallows when a storm whips up a fury.

Some days every beach has at least one dead triggerfish on it. Once on Constantine Bay we found 55 Triggerfish along the strandline. It seems hard to believe now because the most I’ve seen on one beach since then is five.

I know that in the last twenty years they have become quite common. Groups of 30 or more have been seen from the shore and by divers. Fishermen catch them with a rod a line from the beaches, boats and piers in summer. They go for rag worm and squid and when they are pulled in on the line they snap their teeth in anger. The heaviest recorded catch was 4.5 lbs. They’ve been seen eating mussels of pier legs. They also get into the lobster pots after the rotten mackerel bait.  Sometimes the Lobster men bring them ashore for the aquarium in Rick Stein’s fish shop in Padstow. They swim back and forth trailing their ribbon fins.

They are greyish blue when alive with armour of large scales, like diamond shaped roof slates. The tail is a broad scythe and the dorsal fins start about half way along the body and run back to the tail. They are oval when looked at from the side, like an egg, and tall and thin from the front and back with a large, delicious, eye much higher than the mouth. They have a large strong jaw and a small mouth like a beak with teeth a bit like ours but sharper. The teeth stick out, four on the bottom and six on top. All in all they look as if they think themselves superior.

They are called triggerfish because they have three spines on the top of their body, the largest at the front. These sharp spines are held down most of the time but if they are attacked the spines stick up and lock, like a trigger, making them difficult to eat, when alive.

They live near reefs, usually, and eat crustaceans, crabs, shells, sea urchins so mostly creatures that have to be broken into hence the sharp cutting teeth and strong jaw. They live mostly on the sandy bottom where the males are territorial. When the female lays her eggs she stays around and guards them, keeping them clean and oxygenated, while the male keeps watch from above. Young Triggerfish have been seen hanging around in Sargassum weed near the surface and triggerfish have been seen floating across the Atlantic amongst human debris. In The Blue Planet, a David Attenborough series, there is a Triggerfish swimming in the wide ocean and living in a milk crate, picking off small organisms that form on the surface of the plastic and small fish which swim by. So I guess that’s how they make it across to Cornwall and beyond, up the coast of Ireland and the Outer Hebrides in summer, until it’s too cold.