A sandy beach is a dynamic environment. Sand is constantly on the move driven by wind and water, fresh and salty.

Most of our sand was made in the ice ages and it’s wearing down faster than it’s being made. In the last ice age the sea level was 300 feet lower. As sea water evaporated and fell as snow it became locked into ice sheets and the sea level dropped. Now the opposite is happening, as the ice sheets melt at the poles the sea level is rising so sand, particularly sand in dune systems, has become part of a valued sea defence.

Porthcothan is a long sandy beach with a healthy dune system. The dunes haven’t always been there, they started to grow in the 1920s, increasing in World War 2. This might be because the dunes were covered in barbed wire then and debris gathered in the wire or it could be because shortly before the war houses were built along the roadside blocking the transit of sand straight up Porthcothan valley, where it had always been previously deposited. The houses created a wall and sand built up on the seaward side. As the dunes built the strandline was pushed further down the bay towards the sea.

The strandline is composed of anything left by the tide, including seaweed pulled up from kelp beds nearby.

In the 1990s the council briefly decided to remove small stones with a grader and then thought better of it when they realised that the stones held the sand down.

Next they decided to rake the beach to clean it of everything including sea weed. It soon became clear that the rake had several undesired affects. It broke up dog excrement so that it could not be avoided and broke up glass bottles in the sand, obviously another problem. Then it was found that the population of sand hoppers living in the sand, a population of millions, had vanished. Sand hoppers are a huge food source for birds and young fish. The beach was dying. The seaweed was food for the sand hoppers, they are detritivores or consumers of detritus. It also became clear that the removal of weed was having an effect on the dunes. Seaweed is the only nutrient on a beach, it feeds marram grass and other plants which build dunes with their root systems.

So the raking was stopped and handpicking introduced on two beaches to start with and eventually all beaches in North Cornwall. I was one of those who handpicked for the Council.

North Cornwall has the largest concentration of sandy beaches in Cornwall because rivers and streams cut deep valleys through the slate rock, here sand collects. The sand is also very shelly. Sand from Padstow estuary is so full of shell, and therefore lime, that it’s used as fertiliser on farm land. Elsewhere in Cornwall granite predominates, the valleys are shallower and the sand is more gritty with feldspar, mica and quartz.

Now 80 years after they started to grow the dunes have reached the height of around 8 metres and have crept forward down the bay towards the sea. In the huge gales at the start of 2014 the waves were sometimes 6 metres high in the bay and on a spring tide the front face was cut off making a high sandy ‘cliff’. A large fall of rock caused slate debris to build up on one side of the bay and the stream was forced across the front of the dunes further cutting away the dune face. Now the front edge of the dunes is some metres further back from the sea than before the gales, dune slumping is taking place and the dunes are settling into their new position.

The sand which was removed in 2014 was taken out to sea by powerful waves so the beach level is now lower than it was revealing steps not seen for 30 years.

Weed is not in constant supply on Porthcothan. There is a large kelp bed below the cliffs to the west of the bay but a reef and a group of small islands make a natural barrier, so weed ripped off in early spring gales is usually taken up the coast or deposited on the beach just west of here. Occasionally there is a spectacular dump of weed in May. The last one was in 2004. It was relatively clean, just the usual broken water bottles and socks that float low and therefore get trapped by the kelp stalks.

The weed can cover the whole bay and be 2 metres deep in places. Within days it forms a crust on the top and slumps down into the sand. The bottom layer is compressed and the liquid from the weed leaches down into the sand. The weed level drops daily and as the tide comes over it the sea becomes a soup, drawing bass, grey mullet and other fish in to see what’s living in it. They find kelp fly larvae by the hundreds of thousands, as do the birds which gather on the strandline to see what’s coming to the surface. Birds not usually seen there such as dunlin, how they know about the feast is a mystery. Within a month the bulk of the weed is gone. The sun dries it. The rain causes it to breakdown as it washes out the salt. The sea rinses it. The larvae consume it. If only we had sand hoppers still, how fast would they have eaten it? They have not returned in numbers, just a few thousand hang on through the summer.

The weed breaks down into the sand, helps to bind the upper beach together and it feeds the marram grass. This year we had one small deposit in January. Who knows when we will get a big dump of weed again.

Extract from HELD BY THE SEA, by Jane Darke, published by Souvenir Press 2010.

Slate is a metamorphic rock, heated under pressure as layer upon layer of sediment builds up. These layers are vulnerable, the movement of the earth’s crust buckles and twists them. On the surface the sea reaches into cracks and pulls out loose material. Often the layers are tilted vertical, rain and ice work into joints until the top layers slide away. Rock falls are common. Caves form and collapse. Holes appear in promontories of rock as the sea pounds from both sides, the hole becomes an arch, the arch falls. The rock is ground to nothing in the sand.

A natural beach is a place in constant transformation and this dynamic environment is sustained by a forest of kelp off shore.

Piles of seaweed hold down the sand. Millions of sand hoppers, living in a healthy beach, consume the weed but they’re also an important food source for birds and young fish. When the weed rots it binds a beach together and provides nutrients for ‘sea couch’, a pioneer species, and marram grass which builds the dunes, a natural sea defence, protection against a rising sea. The dunes are the boundary between land and sea.

On this beach the dunes are growing. Fifty years ago you walked straight onto beach from my garden now there are ten steps up to beach level. When Nick’s father lived here he saved the dunes from development; they’d be a car park now.

For five years the Council raked the beaches in North Cornwall. Every morning a tractor covered the surface with furrows, like a field, scraping up large litter but braking glass and scattering dog shit. It also took the weed. There was a tradition of seaweed use for fertilizer but this had been removed by fork with a horse and cart, so most was left.

Within weeks mechanical raking destroyed the habitat. Next year there were no sandhoppers.

There are ‘Awards’ given to beaches, for facilities and cleanliness. One of the criteria then was the removal of seaweed and there were those who wanted raking to continue. If it was removed in some places then they wanted it taken here too. Others argued that picking up litter by hand was more effective, cheaper and less destructive.

Nick found experts on beach environments, on plants, fish and dune formation and sent his research to the council who organised a seminar; inviting experts from both sides to speak.

It was decided to stop raking two beaches to see what would happen, this beach was one of them. I started picking all the man made rubbish out from the shells and weed.

It was not a popular decision, the community was divided. One evening a tractor started removing the strandline weed and I stood in its path.  A few days later I was mentioned in The Daily Telegraph, labelled ‘Environmentalist’. Then a researcher phoned me, asked if I’d be on TV in ‘Neighbours from Hell’. Another year the weed was burnt on the beach, Henry filmed the black smoke blowing parallel to the sand.

With time most people saw that the tourists still came, it made no difference to them.

The Council employed a local person to hand pick every beach. Twelve wardens and rangers clean between here and Bude and I’m still one of them.

Nick said that of all the things he achieved in his life he was most proud of this, ‘And we did it together’.

In May, the year before he died, we looked out onto a beach transformed by weed. Sixty tons were dumped here by the sea one night. There were piles five feet high amid a layer which covered the whole beach from the bank below the dunes to the sea. This fresh dump opened up old wounds.

Nick stopped work and fought for the weed to stay, again. Because of his stroke it was difficult to write letters and get his point across, there were meetings where he was unable to speak. The Council stood its ground, the decision had been made to keep weed on the beach and it stayed.

The weed rotted into the sand. By June the sea covered what was left on a high spring tide, in just a few weeks it was gone. 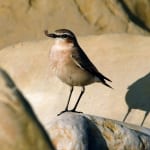 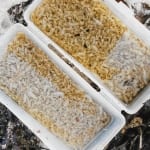 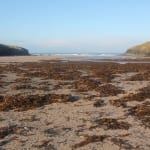 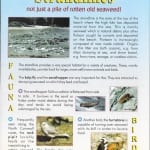 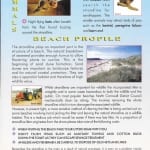 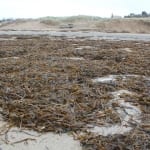